Padangusthasana and Padahastasana – Deep Forward Fold
First standing poses of the Ashtanga Yoga Primary Series
How to come into the postures:
Padangusthasana:
Move the feet hip width appart and enter this pose in the same way you enter the second position of Surya Namascar A, by pivoting from the hips, sucking the belly and finding the inner space of the pelvic floor. Lift the knee caps up and find the basis of the big toes, the little toes and the heels. Pressing down to the ground and with the arches of the feet lifting. Then, hollowing out the pelvis, slowly bringing the hips back and pivot down as you exhale. Wrap your fingers around your big toes. If you cannot grab your toes, you can bend the knees and then straighten the legs. Pause for a moment and suck the belly in, then inhale and straighten the arms and then as you exhale fold forward sucking the belly in. Dangling the arms to the sides and bringing the crown of the head to the matt. Gaze at the tip of the nose. Only if you are proficient at the forward bend, slowly pull the rib cage in and fold in a little bit more.
Padahastasana
These two postures are linked together. Inhale straighten the arms and place the hands under the feet, and then again inhale, lengthen, belly sucks in, and exhale fold. You can also bend the knees if you need.
Don't pull on the hands and don't pull on the feet, instead focus on strengthening the legs, bringing the belly in and relaxing the back. The key in the forward bend is relaxing the back. Once the back is relaxed you can engage the ribs and pull the ribs in to fold forward.
Then if you want to take the posture to another level, bring the sacrum forward. It will feel that you are falling, so suck the belly as deep as you can to balance.
Then inhale look up, exhale release the hands and inhale come all the way back up and bring the feet together into Samasthihi.
These are the foundational forward bends of the practice. If you need to bend your knees a litle to reach the feet, no problem, just put your effort into straightening the legs as much as possible.

The truth is that all these techniques, Martial Arts, Tai Chi, Yoga, they all have one thing in common: to lead the mind into silence! The goal of Martial Arts is not learning to kick and punch to hit other people! The goal is to bring the mind into quietness through the warrior’s path, by stimulating the values of a warrior such as honour, honesty and courage.  The goal is to be able to control the mind under stressful or dangerous situations. By controlling the body we learn to control the mind! Each tradition has developed its own variations which aim at stilling the mind and reaching the silence within. Performed in the context of different faiths and techniques, they may differ in expression, but in essence they are one. Without the philosophy and spirituality, Martial Arts become a meaningless and dangerous sport!

Tai Chi is moving meditation and Martial Arts in slow motion. I find it quite funny that some people seem to get shocked when we say that Tai Chi is Martial Arts. It is like if they felt disappointed as they thought that it was something else, something magic maybe.. However, Tai Chi is the purest Martial Art, and by practising those movements in slow motion they become a lot more refined and when used in the context of a combat, each movement is perfect and effective  – “one step one kill”.

But also the beauty of Tai  Chi is that we  learn to work with the energy of our body, what we call the “Chi”. And it is the slow movements and the energy created within the body that brings the calm and quietness in the mind. This is the part that people like to hear: Tai Chi with its slow movements brings serenity and inner peace, like magic. They don’t like to hear it is a Martial Art, but it is indeed.

All these different techniques, either Yoga, Martial Arts or Tai Chi they are methods of purifying the nervous system so that it can reflect a greater  degree of consciousness.

So, in answer to my original question, yes, Yoga and Martial Arts are perfectly compatible. 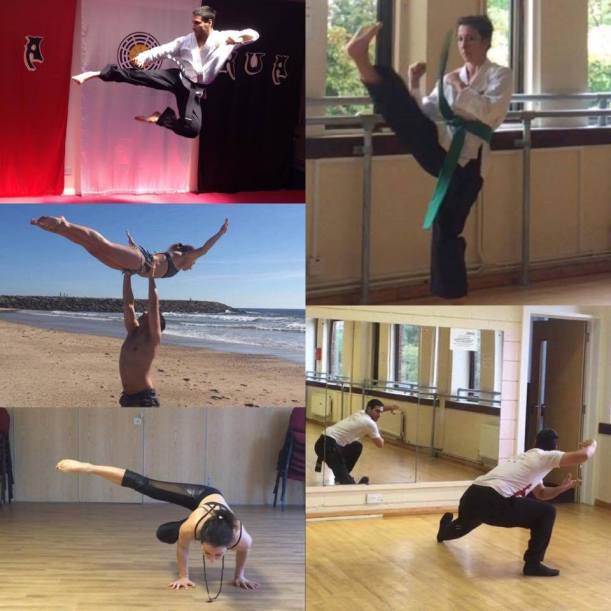 Sun Salutation B
Surya Namascar A is the easier sun salutation in Ashtanga Yoga. Surya Namascar B is harder as we integrate two extra movements:
Utkatasana, the chair pose and Virabhadrasana, the warrior pose.
Start nice and slow and then as you become more familiar with the movements bring it up to its full pace.
Tune into the inner body and feel the heat and fire

As we move through the sun salutation the body heats up, the mind sharpens and the inner fire

of purification starts to cultivate in the inner body. As you begin to practice the sun salutation you will notice that it is like an old friend, in which you will get to know these motions really well, but at the same time there is always room to dive deeper and explore new options, new perspectives and new awareness. The sun salutations are the foundation of a complete practice. You can just do the sun salutations if you don’t have time or feeling sick or with low energy. As little as 5 minutes a day will build the foundation and the elements of a complete practice.